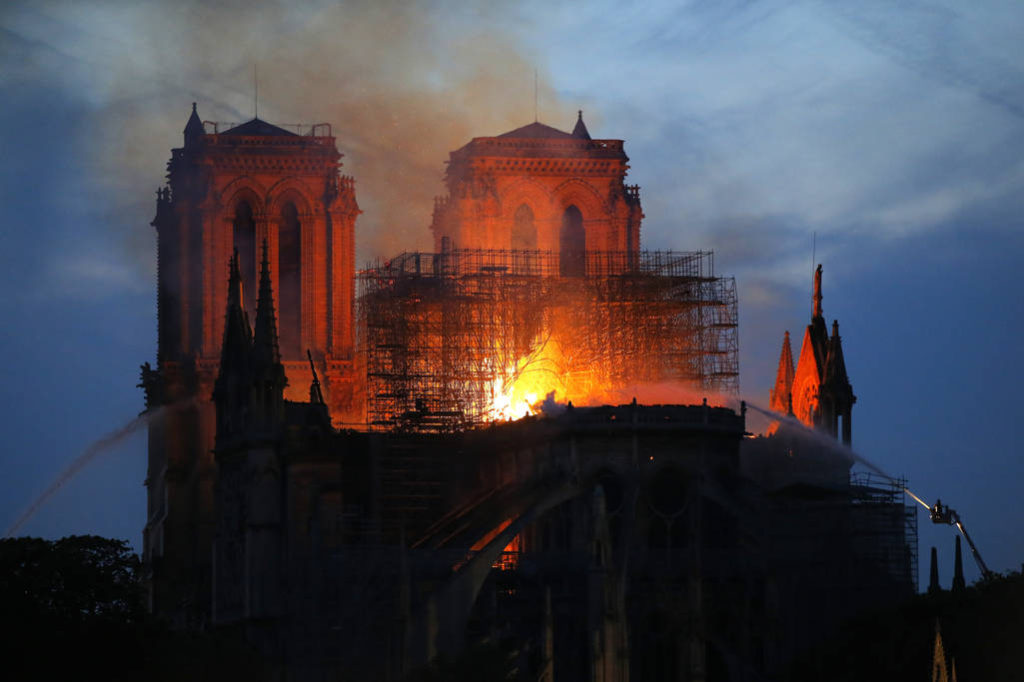 As I’m sure you know, the great cathedral of Notre Dame suffered a terrible fire on Monday night. Many words have been written about the tragedy and I think some of the most beautiful were in Le Monde. Please find my translation below.

France Touched To The Heart

Like a majestic stone ship enclosed by the two arms of the Seine, Notre Dame has always maintained a singular dialogue with the history of mankind and the eternity of the gods. The terrible, voracious, long-lasting flames that ravaged the Cathedral of Paris did not put an end to this dialogue. But they will add to it the staggering pain of the catastrophe, the tragedy of the Parisians, the mourning of a France touched to the heart, and the immense wave of sadness that has traveled the planet.

The emotion of all was mixed with the sobs stifled by many. For Christians, first of all, the Church of Our Lady has been for more than eight centuries – or fifteen centuries including its former Merovingian form – one of the high places of a faith that has shaped Europe through the ages. Unlike many other houses of worship, if it had not always withstood the ravages of time, the cathedral had escaped the flames that had destroyed so many others. Its medieval roof, this mysterious “forest”, is today in ashes.

Notre Dame, enthroned in the heart of the island where the city was born, with its long and high nave, two massive towers and the spire which collapsed in flames yesterday, was for Parisians the eternal silhouette of the city, almost its magnetic pole. And for all lovers of art and civilization, the cathedral was a sumptuous Gothic jewel, a miracle of architecture, and a priceless museum that will take years, even decades, to repair and restore.

Geography, history, and literature have made Notre Dame the epicenter of the country. On its forecourt is the “zero point” from which is calculated the distance to every town in France. Its nave has hosted some of the richest chapters of the national novel. Kings were crowned in Reims and buried in Saint-Denis, but for centuries the monarchy came to kneel at Notre Dame, to celebrate marriages and military victories. A decade after the Revolution, which did not spare it completely, Napoleon had himself crowned emperor in 1804.

The French republic has often made it the place of its triumphs and sorrows. It was the great bell of Notre Dame which first sounded the victory of 1918. It was in this cathedral, under rifle fire from the desperadoes of the Collaboration, that General de Gaulle came to celebrate the liberation of the capital in 1944. There again, all the great people of the planet gathered to salute, during solemn Masses, the death of three French presidents: de Gaulle, Pompidou and Mitterrand.

“On the face of this old queen of our cathedrals, beside a wrinkle, we always find a scar,” wrote Victor Hugo, chronicler of Notre Dame. The scar, this time, will be indelible. “We will rebuild this cathedral,” Emmanuel Macron assured us on the evening of the disaster. But this commitment will not be able to erase the terrible images of the immense fire that spared Notre Dame only its skeleton of stone, nor will it erase the memory of a poignant evening of mourning, both for France and across the globe.